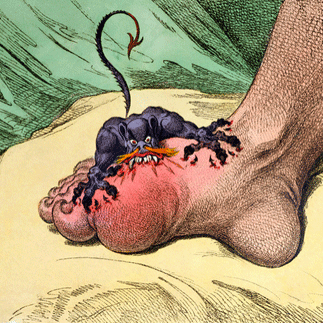 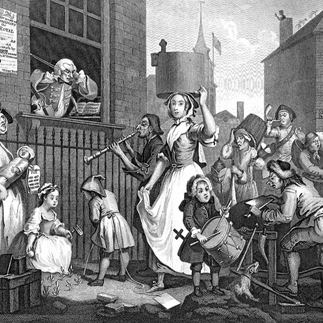 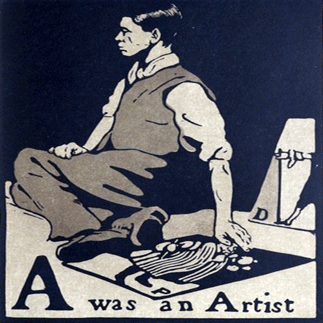 Humour ,Politics , Satire
Sir Henry Alken,(British, 1785-1851) was a leading British sporting artist, exploring the comic side of riding in this series of prints depicting the follies and foibles of aristocrats on their weekend outings. They were part of a larger movement of caricature prints lampooning British society that were published in England in the first half of the 19th Century, by artists such as Thomas Rowlandson.Henry Thomas Alken was a painter and engraver, son of artist Samuel Alken. He worked in London and the provinces and was prolific in a variety of media, including painting, etching and watercolor. Trained as a miniature painter, his works always had a graphic precision. He is known for hunting, coaching, racing and other animal subjects. He was also employed by sporting periodicals as an illustrator and provided plates for the National Sports of Great Britain (London, 1821), "strengthening the market for his work in sporting circles, in particular the notorious clique of wealthy and reckless huntsmen who gathered at Melton. The Beauties and Defects in the Figure of the Horse comparatively delineated - 1816; National Sports of Great Britain - 1821; Humorous Specimens of Riding - 1821; Symptoms - 1822; Sketchbook - 1823; Sporting Scrapbook - 1824; Shakespeare's Seven Ages - 1824; Flowers from Nature - 1824; A Touch of the Fine Arts - 1824; Humorous Illustrations of Popular Songs - 1826 Don Quixote - 1831; The Life and Death of John Mytton - 1837; Jorrocks Jaunts and Jollities - 1837 The Sporting Review - 1842-6 The Art and Practise of Etching - 1849. Also published in the Illustrated London News and other newspapers of the day. 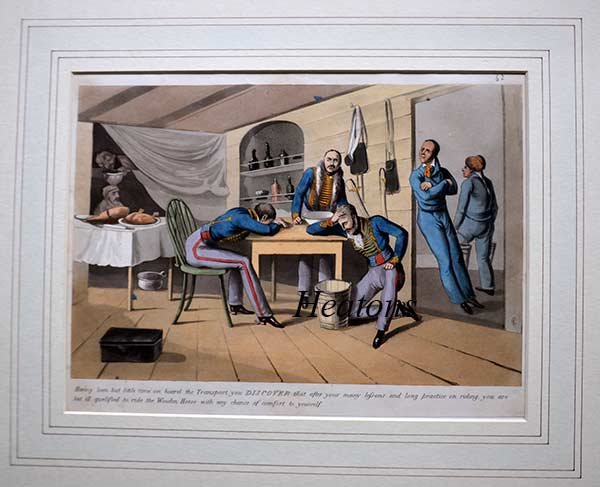 'Having been but little time on board the Transport you Discover that after your many lessons and long practice on riding , you are but ill qualified to ride the Wooden Horse with any chance of comfort to yourself "
ALKEN, Henry; TALLY-HO, Ben Military Discoveries London: S & J Fuller, 1819.  Scarce Misery in the Army  " Military Discoveries or, The Miseries of campaigning in a series of seven plates being Hints to Young Officers." Published  London: S & J Fuller, March 24, 1819. by Ben Tally-Ho. London: S. and J. Fuller, 1 February 1816  most are watermarked Whatman 1815. Oblong 266 x 365mm.  One of 7 hand-coloured aquatint plates that are stupidly rare the last copy to come to auction was fifty-three years ago, in 1961 plus in original coloured ie more expensive format  £195 mounted inc delivery


Thomas Rowlandson (July 14, 1756 & April 22, 1827) was an English artist and caricaturist.He was born in Old Jewry, in the City of London, the son of a tradesman or city merchant. On leaving school he became a student at the Royal Academy. At the age of sixteen, he lived and studied for a time in Paris, and he later made frequent tours to the Continent, enriching his portfolios with numerous jottings of life and character. In 1775 he exhibited a drawing of Delilah visiting Samson in Prison, and in the following years he was represented by various portraits and landscapes. He was spoken of as a promising student; and had he continued his early application he would have made his mark as a painter. But by the death of his aunt, a French lady, he inherited £7,000, plunged into the dissipations of the town and was known to sit at the gaming-table for thirty-six hours at a stretch. In time poverty overtook him; and the friendship and example of James Gillray and Henry William Bunbury seem to have suggested caricature as a means of filling an empty purse. His drawing of Vauxhall, shown in the Royal Academy exhibition of 1784, had been engraved by Pollard, and the print was a success. Rowlandson was largely employed by Rudolph Ackermann, the art publisher, who in 1809--issued in his Poetical Magazin by Rowlandson himself in 1812, and issued under the title of the Tour of Dr Syntax in Search of the Picturesque, they had attained a fifth edition by 1813, and were followed in 1820 by Dr Syntax in Search of Consolation, and in 1821 by the Third Tour of Dr Syntax in Search of a Wife. He also produced a body of erotic prints and woodcuts, many of which would be considered pornographic today. The same collaboration of designer, author and publisher appeared in the English Dance of Death, issued in 1814-16, one of the most admirable of Rowlandson's series, and in the Dance of Life, 1817. Rowlandson also illustrated Smollett, Goldsmith and Sterne, and his designs will be found in The Spirit of the Public Journals (1825), The English Spy (1825), and The Humourist (1831). He died in London, after a prolonged illness, on 22 April 1827. Rowlandson's designs were usually done in outline with the reed-pen, and delicately washed with colour. They were then etched by the artist on the copper, and afterwards aquatinted --usually by a professional engraver, the impressions being finally coloured by hand. As a designer he was characterized by the utmost facility and ease of draughtsmanship, and the quality of his art suffered from this haste and over-production. He dealt less frequently with politics than his fierce contemporary, Gillray, but commonly touching, in a rather gentle spirit, the various aspects and incidents of social life. His most artistic work is to be found among the more careful drawings of his earlier period; but even among the exaggerated caricature of his later time we find hints that this master of the humorous might have attained to the beautiful had he so willed. His work included a personification of the United Kingdom named John Bull who was developed from about 1790 in conjunction with other British satirical artists such as Gillray and George Cruikshank 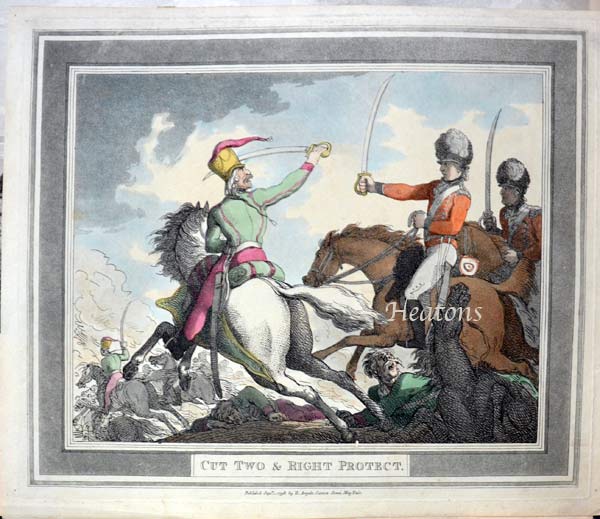 Cut Two and Right Protect
From the Hungarian and Highland Broadsword folio by Thomas Rowlandson Etching with aquatint and original hand colouring Published London, by H Angelo Sept 1st. 1798 Size 320 x 270 mm page is just out of plate mark 1+ cm margin but printed this way ! One of Twenty Four Plates, designed and etched by T. Rowlandson, under the Direction of Messrs. H. Angelo and Son, Fencing Masters to the Light Horse Volunteers of London and Westminster dedicated to Colonel Herries. London: Published by H. Angelo, February 12, 1799. £180 inc delivery

'Having been but little time on board the Transport you DISCOVER that after your many lessons and long patience on riding you are but ill qualified to ride the Wooden Horse with any chance of comfort to yourself.'
Hand tinted plate  of seasick soldiers/naval officers originally from  Henry Alken ; TALLY-HO, Ben Military Discoveries London: S & J Fuller, 1819.  Misery in the Army / Military Discoveries or, The Miseries of campaigning in a series of seven plates being Hints to Young Officers. London: S & J Fuller, March 24, 1819.  257 x 355 mm One of seven  aquatint plates  only three copies (all untinted  cheaper version ) in institutional holdings worldwide £185 rare tinted copy in wash line mount 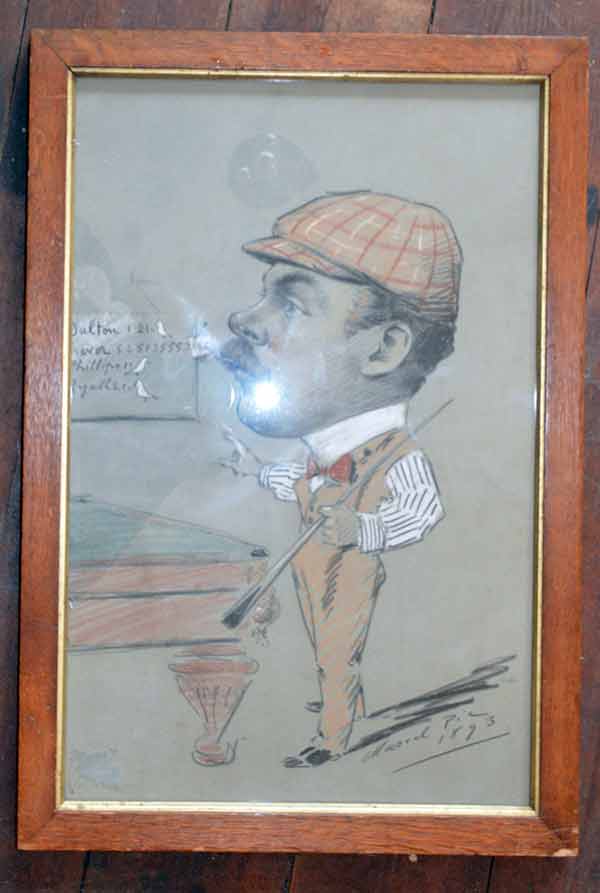 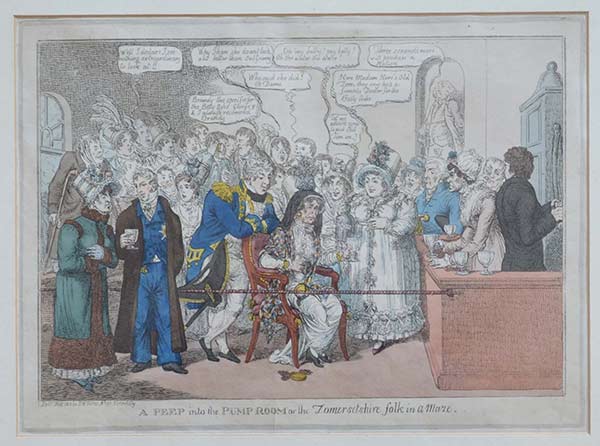 A peep into the Pump Room, or the Zomersetshire folk in a Maze 1818

The Pump Room at Bath is crowded with people striving to see Queen Charlotte, who sits in an arm-chair facing the low barrier surrounding the pump. She holds a goblet, and puts a hand to her waist, exclaiming "Oh! my belly! my belly! Oh the water the water!" She wears a fashionable bonnet with a fringed shawl over her long limp gown, with high-heeled shoes of antique pattern. Her snuff-box is on the ground. Two women stand by her, one with a bottle of 'Old Tom' saying "Here Madam Here's Old Tom [strong gin], they say he's a famous Docter for the Belly Ache"; the other says: "let me advice you to put Old Tom in.!" The Duke of Clarence in naval uniform leans on the back of the Queen's chair, saying, "Brandy the specific for the Belly Ache George & I always recomend Brandy." A man pumps (right); an elderly woman hands glasses to the company who, with the Queen, are all, with two exceptions, behind a red rope attached to the barrier. Those behind stand on tables and chairs to see the Queen. A doctor looks towards her, saying, "Three seconds more will produce a Motion." Others say: "Well I declare I see nothing extroardinary to look at!!"; "Well Jhan she doant look a bit better than Oul Granny"; "Who said she did? Eh Dame." Height: 263 millimetres Width: 363 millimetresInscriptions Inscription ContentLettered: "Pubd Feby 1818 by S W Fores N° 50 Piccadilly" Drawn by Charles Williams Framed Glazed some toning older colour  crease centre at base £155 inc delivery sent  to USA minus glass 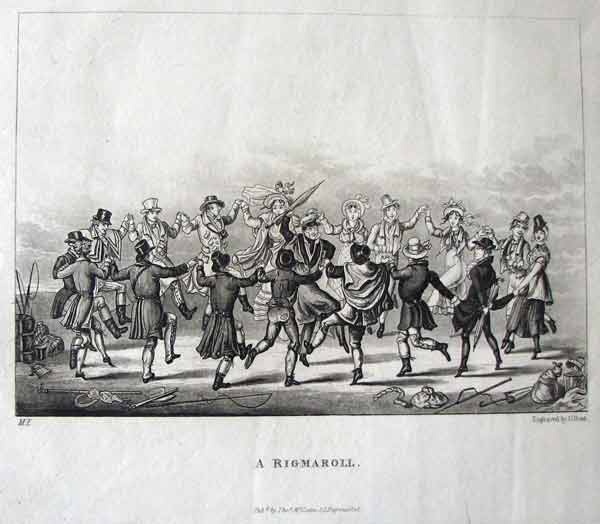 A Rigmaroll
Etching and aquatint Illustration to Egerton's 'Airy Nothings; or scraps and noughts, and odd-cum-shorts'; men and women dancing with hands joined in a circle, an old man in captain's hat waving an umbrella in the centre; after M. Egerton. 1825 Inscription Content: Lettered below image with title, production detail: "M.E.", "Engraved by G. Hunt" and publication line: Thomas Mc Lean, Haymarket. Height: 195 millimetres  Width: 236 millimetres £55 rare only found one in BM 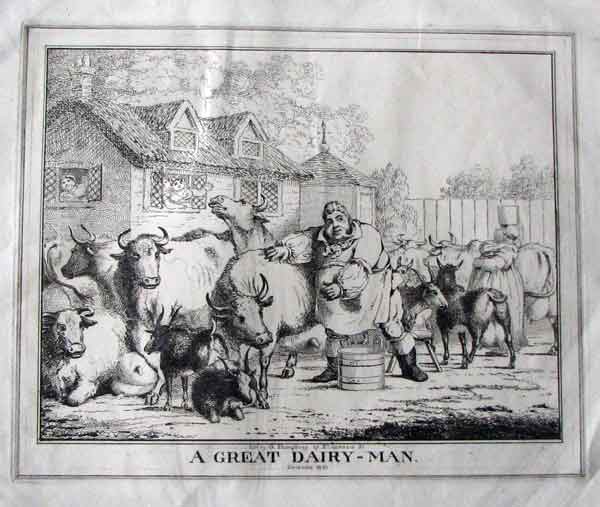 A great dairy-man
Scarce print published by Published by George Humphrey  drawn by by Theodore Lane . Cows and goats with distended udders are grouped outside a small thatched cottage (see No. 13893). The King, wearing apron, over-sleeves, and top-boots, stands by a cow, an arm resting on her back, his pail at his feet, his stool behind him. Behind (right), a fat dairymaid, presumably Lady Conyngham, walks towards the cottage, her pail on her head. Three plump women watch from open casement windows. December 1820 Etching with hand-colouring Inscription Content: Lettered with title, and "Pubd by G.Humphrey 27 St James's Street December 1820." Theodore Lane, a brilliant young caricaturist who died in 1828, born in 1800 at Isleworth, in Middlesex.  He was largely self taught as an artist, although he must have received encouragement from his father, who had been a drawing master at Worcester. At 14 he was apprenticed to the minature painter John Barrow at Battle Bridge. He studied watercolour portraits and miniatures, exhibiting at the Royal Academy from 1819.Seriously rare one in BM on rag paper came from large ex Gallery uncoloured  with the Sayers and others  £165 inc 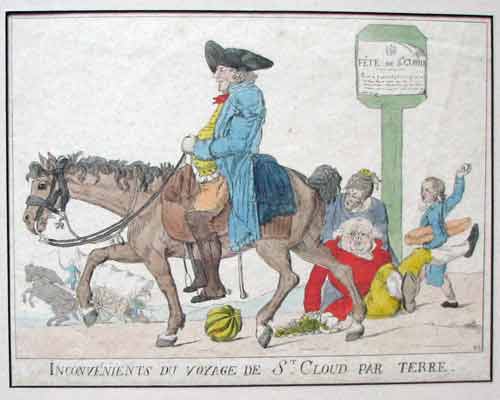 Postal Caricature showng the postie on horeback attributed in the only other copy I can faind to Neel who wrote an early travel treatise in 1753. Initiatled to the base line with n.l. simple line etching with later but early colour. Light overall toning to cream from white , mounted rare £150 inc delivery 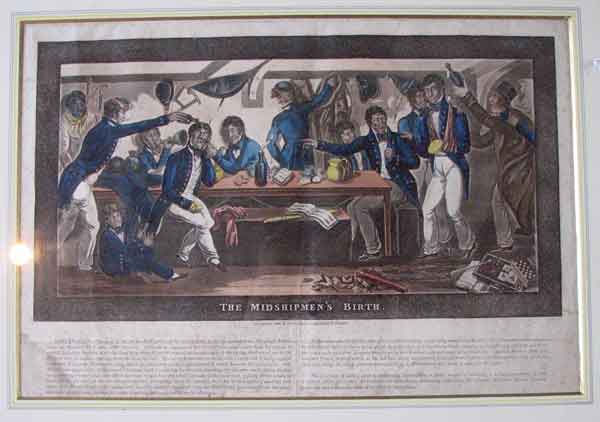 The Midshipman's Birth / Berth
Published by I. W. Laird, 1, Leadenhall Stt. 1841. Image 29.5 x 45.5 cm hand coloured mezzotintssome age toning and staining to the legend below.The setting below deck shows the off-duty activities of young midshipmen and other men in their mess cramped between decks. At present framed ( modern) in a wash lined mount £160 inc delivery

DELIVERY & PAYMENT Payment is via Paypal if other methods are preferred contact the shop directly we take most cards, cheques etc**Prices are postage inclusive worldwide if over £35